Archive for the tag “Jamie’s”

Our view of the London skyline

Yikes! It’s been awhile since I posted. This will likely be of more interest to friends and family; but the rest of you are welcome along for the ride too!

It’s been a busy few weeks since I last posted. In early December we flew to Cancun, Mexico via Paris, to spend a week in the sunshine at our timeshare near Playa del Carmen over Michael’s birthday. We met up with our Canadian friends, Irene and Pierre, who we had met at the timeshare several years ago, and made new friends with a couple from Florida, Joan and Siegie. The six of us hung out together; relaxing during the days poolside or on the beach, and making some raucous fun in the evenings. The weather was fabulous, warm and lots of sunshine; and we found that after flying in business class (when work pays), that we could still survive traveling coach!

When we returned from Mexico, the next day we took the fast train from Rome to Milan for a big holiday party Michael’s work threw for it’s customers. We got to stay at the Baglioni Hotel again (unfortunately our room wasn’t as fabulous this time as it was the first time), and it was great to meet some of Michael’s Rome and Milan coworkers. It was a quick trip and the following day we were on the train heading home to Roma.

We had one day at home and then we were back at the airport again, this time off to England. We spent the first night seaside at the Grand Hotel in Brighton and attended a holiday party that night at Jamie’s (a great Italian restaurant; it’s funny that everywhere we go, we end up eating Italian!) with Michael’s coworkers in the UK.

It was pouring buckets of rain the next day and the sea was a wild mass of waves as we headed into London for the weekend. We stayed at the Belgraves hotel in the Belgravia section of London. It’s a wonderful small hotel, newly redone and very modern, and after a room change, we ended up with a room on the top floor with great views of the London skyline. We ate a late dinner that night at a lovely steakhouse with live jazz music recommended by a coworker, and we enjoyed both the music and chatting with the couple from Northern Ireland at the next table.

Saturday found us in awe, as we explored Harrod’s department store. We lunched at one of the many food counters in the food court and after having enough of the huge pre-Christmas shopping crowds inside, we headed outside for more! Dinner that night found us again at an Italian restaurant, Cipriani, with some of Michael’s coworkers. I was hesitant, as the reviews on TripAdvisor weren’t very good, but the food was fabulous and the service good too. And I must say, I looked fabulous in my new dress, bought for the occasion!

We’ve been back home in Roma for the week now, catching up on laundry and house cleaning, doing some holiday shopping, and seeing friends. We’re heading back to London next week to spend the week between Christmas and New Year’s there, thanks to the generosity of one of Michael’s local coworkers, who offered her flat to us while she’s away on holiday in the States. We’ll be using the time to take care of her 2 kitties, but also sightseeing and trying to get to know the city a bit better.

We liked London. It was nice to be back in the land of English speaking folks, and yet interesting that everyone we met seemed to be from somewhere else! It’s wildly expensive though; so much so, that it’s better for us to turn our dollars into euro and then into pounds rather than directly from dollars to pounds.

We’ll be back in Roma for the New Year. I promise to write about London when we return. Thank you again, for following along on our adventures. I send you warm wishes for a safe, and sane holiday season! Buon Natale! 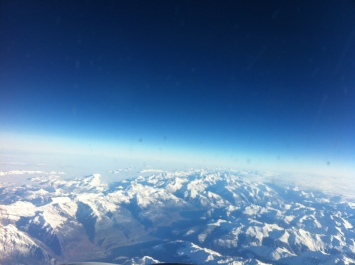 View of the Swiss Alps from the plane

French food at the airport (I wasn’t sure what it was, but it was tasty!)

The gang in Mexico stirring up trouble!

The beach and sea

Michael FINALLY relaxing on our veranda

Michael and his boss, Maggie at the Xmas party

Our view of the London skyline

Keeping the fish fresh at Harrods

A very expensive chandelier at Harrods 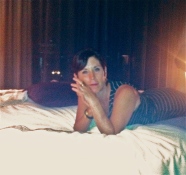