Archive for the tag “Golden Triangle in Milan”

We had the opportunity to travel to Milano last week so Michael could attend a work meeting. We stayed at the Carlton Baglioni Hotel in the middle of Milan’s Golden Triangle shopping district. It was so luxurious and plush, I had a hard time dragging myself out of the room most days. It was so fabulous that we even stayed an extra day!

I have been to Milan in the past on prior trips to Italy. This time though, after living in Rome for awhile, the contrast of the two cities seemed huge. While Rome’s population is double that of Milan, Milan seemed bigger (and it may be if you compare the area and not population). While it is also very old, much was destroyed during WWII and so has been rebuilt. It had such a different feel than Rome…more modern, contemporary, bright, despite it’s gray skies. Cars actually seemed to drive in their own lanes and not honk incessantly at each other. There even appeared to be more people than cars, unlike in Rome!

We ate at a recommended traditional Milanese restaurant, which was good, but the food was heavy, compared to Roman cuisine, which I’ve become quite fond of. One night we wonderfully stumbled into Nobu at Armani and had yummy saki martinis and great sushi. Ahhh…it reminded us of home. We’ve yet to find fabulous sushi in Rome, though we’re told it does exist.

We visited the Duomo, Milan’s great cathedral. Despite the rain, we ventured onto the famed rooftop to explore and took in all of the Duomo’s incredible majesty. We marveled at the chic shop windows with all the fabulous clothes and furniture, while gasping at the prices. We found the less expensive areas for shopping and of course found a few treasures.

The Le Frecce trains, which are high speed, make traveling around Italy’s main cities, quick and a pleasure. It was good to return to Rome, it all it’s complicated glory, but I’ll look forward to visiting Milan again for a hit of contemporary cosmopolitanism.

Gerrie in front of the Duomo 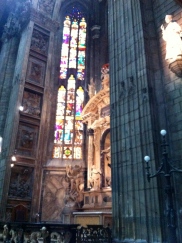 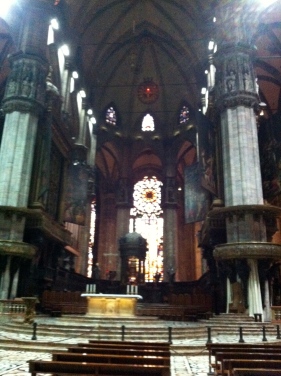 The main alter in the Duomo

Rooftop of the Duomo 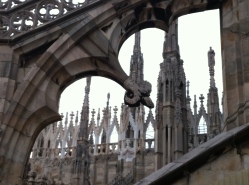 Rooftop of the Duomo

I’ll take one of each!