Archive for the tag “Cathedral Palma”

We were able this summer to take a few vacations from our daily life in Roma. The first trip was to the Spanish island of Majorca (the Spanish spell it Mallorca, but I’ll use the English version.) The second was a cruise to several stops in Italy, then onto Greece with a stop in Turkey. This post will highlight Majorca. Look for Part 2 – Almost Out of Italy for highlights of the cruise. Thanks for joining us!

Majorca is the largest of the islands that make up the Baelaric Islands archipelago, located in the Mediterranean Sea off the coast of Spain. When planning time outside of Rome, we had talked about going to Barcelona, but it was cheaper to fly to Majorca and we love the beach, so off we went.

Majorca has been inhabited for quite a long time. Evidence has been found indicating it was occupied in the Paleolithic period, which was 6000 – 4000 BCE. The capital city, Palma, was occupied by the Romans during the time of the Roman Empire, and then later by the Bynzantines, the Moors and a host of other invaders. It became part of Spain in 1716, and in modern times has become a popular holiday destination especially among the English, Germans and Scandanavians. According to Wikipedia, my source for this little history lesson, in 2008, over 22 million people passed through the airport in Palma, with an additional 1.5 million people arriving by sea. Quite the busy place!

We stayed for 5 days at the Luabay Marivant, an “adults only” resort, located just 10 minutes outside of Palma. Don’t get too excited… the “adults only” part just meant there were no children underfoot. It was clean and comfortable, with a swimming pool and a lovely little public beach just below the hotel. I think we were the only native English speakers in the place, as the majority of the guests were Scandanavian and German! We enjoyed the beach and pool, the lovely restaurant located on the beach, and we ventured into Palma and beyond into the surrounding areas a few times.

We visited the imposing Cathedral of Santa Maria de Palma, commonly referred to as La Seu. It’s a Gothic style Catholic church that took over 350 years to complete. In the early 1900’s, Antoni Gaudi, a famous Spanish architect and artist was invited to take over the renovations that had been undertaken at the church. He later resigned but left his mark as you can see in the photos below.

We visited a few good restaurants and had some great meals while on Majorca. I wrote a few reviews for Trip Advisor about our experiences and you can read about those if you’re interested here, here, and here. All in all, it was a great get away and someplace we’d love to return to again to further explore this beautiful island. 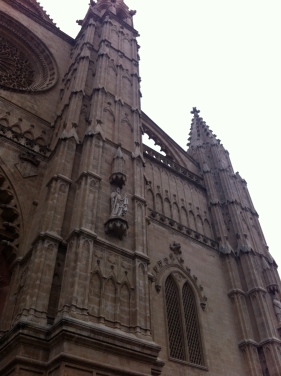 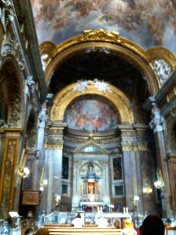 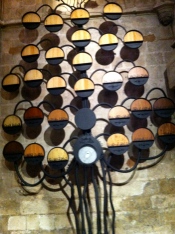 Art in the Cathedral 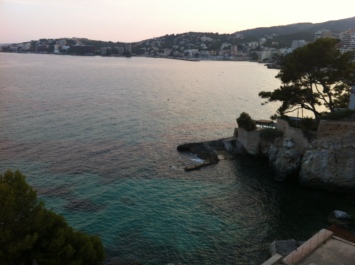